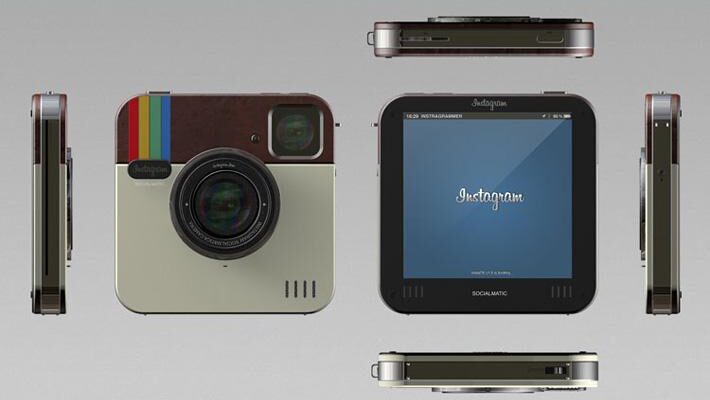 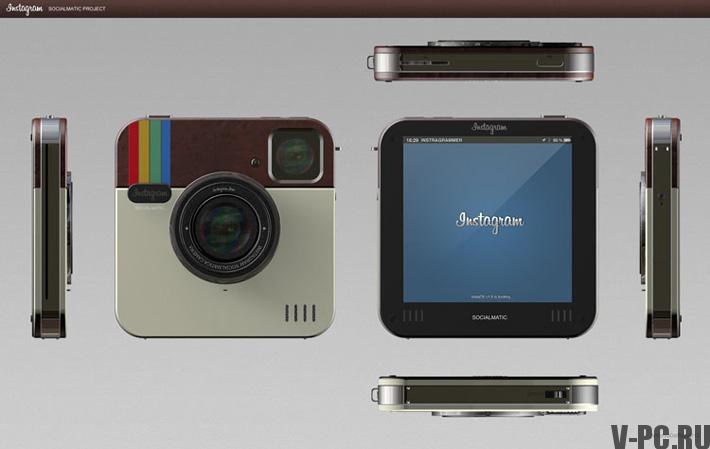 Are you a fan of Instagram? then for you there is a surprise, a camera which made in the form of an Instagram icon. And this camera is already on sale in early 2012, a designer from Italy Antonio De Rosa proposed this concept.

According to a post dated May 5 on the official website of the ADR studio, this the camera can have 16 gigabytes of internal memory for photo storage, large touch screen, optical zoom, and, in As communication capabilities, there is Wi Fi and bluetooth. it The stunning concept is called Instagram Socialmatic Camera. The whole coolness of this project are chips that allow you to transfer the charms of the famous Instagram to the real world. First, Instagram Socialmatic Camera has two lenses, one of which is designed for ordinary shooting, and second for three-dimensional filters. In addition, the camera has an application with which she can become a webcam, and application for capturing and recognizing QR codes. But the most This camera allows you to do interesting things with photos. Of course, you can process the photo just taken on your Instagram Socialmatic Camera in exactly the same way as you would do it using Instagram on your mobile phone. After processing, you can immediately post the result to Facebook. This will allow you to get photos from the famous instagram processing but made by much better optics than your optics phone. However, the main miracles are yet to come!

Instead of just posting the photo to the FB, you can print it using Instagram’s built-in Socialmatic Camera polaroid printer. It’s what everyone loves Instagram so much for – Vintage Polaroid Photography. The photo will be printed at the top. your avatar and nickname on Instagram, as well as a QR code that others instagrammers can scan if they like your the work they saw, for example, on a pillar or wall. And your work will be everywhere! After all, every photo printed on Socialmatic Camera is equipped with a special adhesive strip so you could “post” their work in the real world! And on each Photos have room for comment.

“When I was working on the idea of ​​Instagram Socialmatic Camera, I dreamed of transferring all the impressive experience and opportunities Instagram and Facebook to the real world. With the addition of some “physical” features such as photo printing, ”says designer Antonio de Rosa. 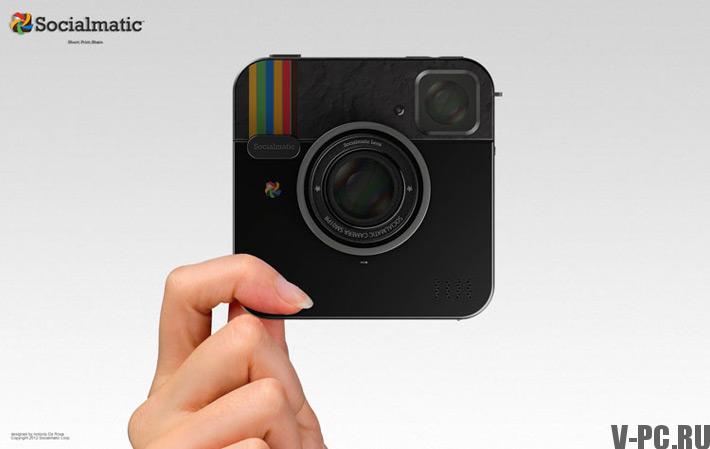 Everything that was written above related to the concept of the camera, which existed only as an idea, albeit carefully well thought out. However, we live in an amazing time! Dreams Come True and this concept, which has received strong support from Internet users, becomes a real product! Yes Yes. According to the last information from the website of the ADR studio, buy Instagram Socialmatic camera It will be possible in mid-2013.

We will share with you the latest information from the site developers of this wonderful camera, which, without exaggeration, may be a new milestone in photography. And the first camera created at the request of the crowd.

Antonio himself writes that the project began as a joke, an idea to make the camera in the form of an icon of the popular Instagram seemed funny to him. But thanks to user support and the courage of investors, decided to invest in this project, the idea became reality. 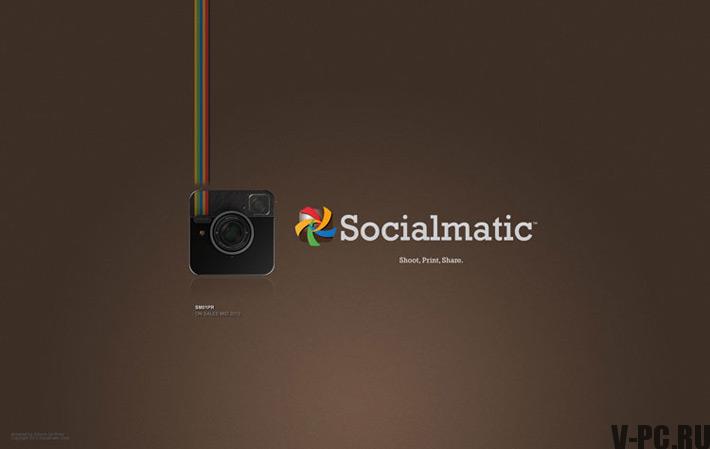 But, as always, this happens when the idea begins to translate into life, she has to change in accordance with the rules of real of the world.

First, now, the camera will be called, just Socialmatic Camera, as its company is in no way affiliated with Instagram is not with Facebook.

Secondly, the camera will work on the Android OS, modified for her specific tasks.

– Be emotional and open – Take a picture – Apply to snapshot filter – Share it via Facebook, Instagram, Twitter or send it via email or MMS – Instantly print picture using the built-in printer, peel off the protective layer from sticky snapshot section and share it with the whole real world!

The first camera model was labeled SM01PR. On its basis 4 versions are formed. 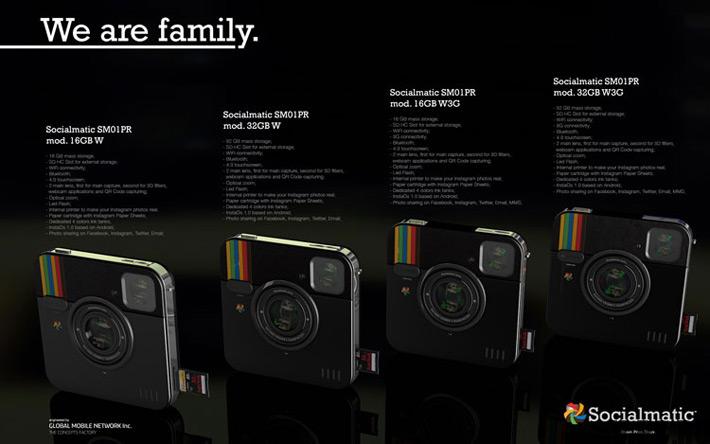 You can choose between 16 or 32 gigabytes of internal memory for storage, and decide if you need a 3g module. WiFi will be in the camera any model, as well as a slot for an SC HD memory card, if you don’t enough built-in space.

As you can see from the picture above, the design is real the product is slightly different from the first layouts of appearance the cameras 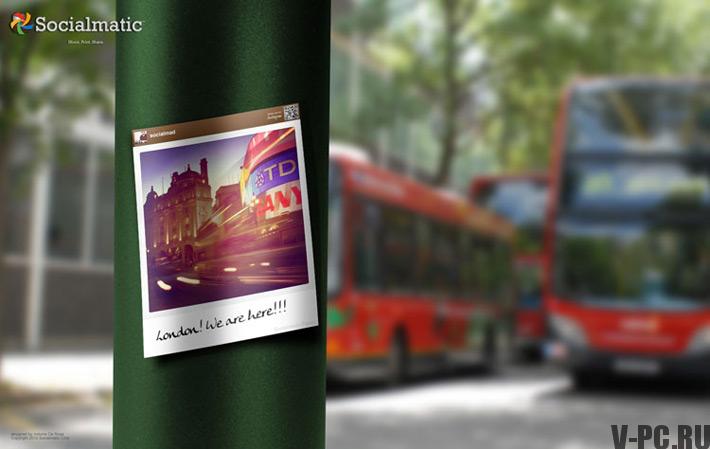 Here are some more recent Socialmatic Camera photos that designers and developers shared with those in tedious waiting by users. 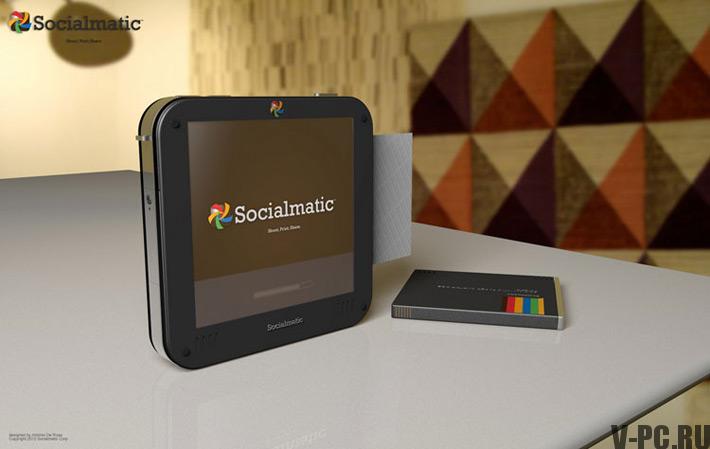 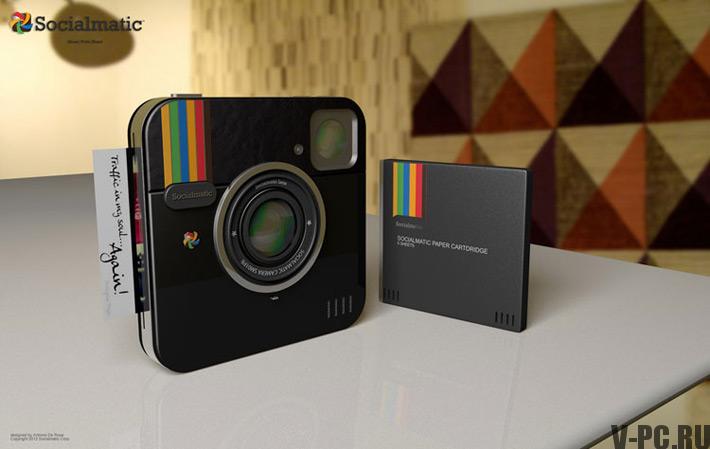