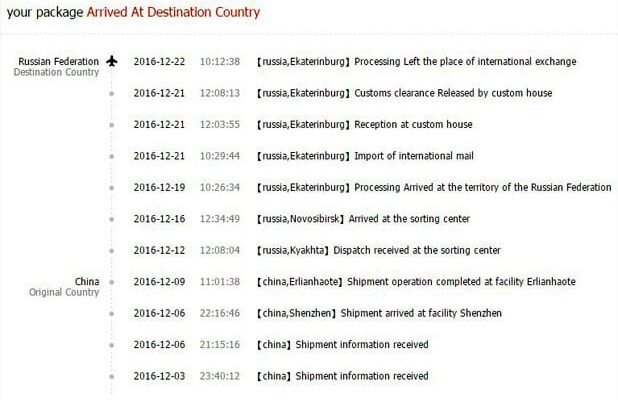 What does Customs clearance status mean, Released by custom house

Literally Customs clearance, Released by custom house translates into Russian as “Customs clearance received, goods missed by the customs. “This status appears in the end of the security check, which consists from several stages:

Suspicious packages can be opened and studied more carefully, what is the corresponding act drawn up attached to the shipment and issued to the recipient at the post office. Each package is not being examined.

Interesting: One of the most popular tracking services. Yanwen Economic Air Mail Parcels.

The customs clearance period does not depend on the type of goods delivered and delivery service used. By law, all procedures with the package must be committed within one day. All way of departure from the airport to the post office should keep within a week for Moscow, 9 days for St. Petersburg and other large regional centers, 11 days for the rest of Russia.

In some cases, the package may be delayed by customs at a longer period – most often this is due to holidays in which the service is overloaded. It concerns mainly goods sent by national delivery services – in the case of Aliexpress is China Post.

If the status of Customs clearance, Released by custom house is not appears for several days or more, and objective reasons this is not, then there were problems with the package. Find out what’s wrong with her happened in several ways:

The complaint is sent to the official website of the customs. Make her up can be in free form, indicating the country of departure, number tracking, delay times. Also need to leave your personal data, including the address to which the service will reply, in special form on the site.

It is also possible that the problem is not with customs, but with the tracking itself. Recently, the Russian Post has been experiencing problems with the system tracking, and the package may be in transit while status, talking about the departure of the shipment from customs does not change. May well such a situation happens that the parcel will arrive at the post office at the place of residence before moving out of the airport the track.

Most often, problems with customs arise if the parcel came from China to Vnukovo Airport. If the departure is delayed in it more than 3 weeks, you should write a wanted application parcels. To do this, you need to get a check from the seller, download from the site Russian Post Form and fill it out, then give both documents post office operator. The answer should come within 2 weeks.