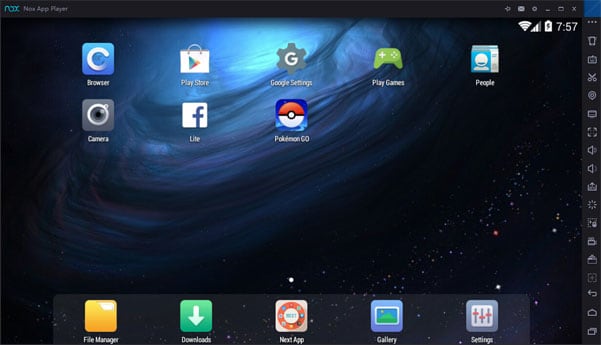 A Little About Nox App Player

The niche of Android emulators on PC has been solid busy with famous Bluestacks, the share of other emulators is null and void. But the recently released Nox App Player emulator by expert opinion can significantly shake the hitherto status quo. Nox App Player has a number of features that are not available Bluestacks, it perfectly emulates the Android operating system 4.2.2 KiteKat, has the function of supporting multitasking, has already installed directory Google Play, and also knows how to work with various game controllers. The developers promised reliable work with Windows 10 and support for all modern AMD processors. ABOUT how to run Pokemon go on the Nox App Player next.

At the same time, the Pokemon go game on the Nox App Player emulator works faster than Bluestacks, and does not require a bunch of extra movements. Everything is quite simple, convenient, compact.

Pokemon game go do not run yet. Press on the fake geolocation icon (usually the fourth from the top right), and indicate in the location bar the place where you are going to play Pokemon Go Nox App Player (for example, your city) and click Geocode. At the same time, remember that if you now indicate your city, and then decide to travel a thousand kilometers and catch Pokemon in Moscow or North Palmyra, you may be banned for using fake location in the game. Decide on one a specific place and play only in it. 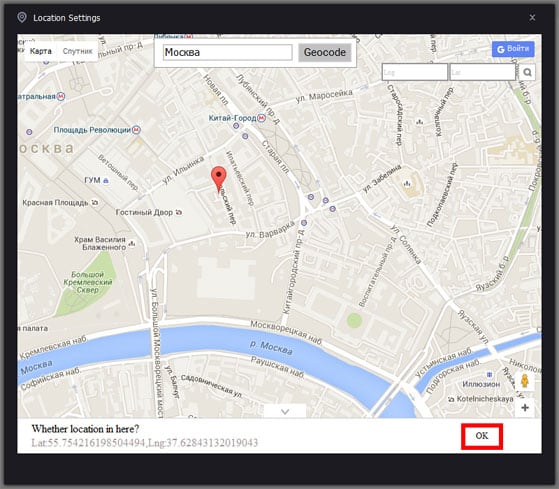 Geolocation in the emulator

The Pokémon Go game is starting. Walking management the character in Nox App Player is done using the WASD keys, which allows you to play Pokémon without leaving your home.

How the process of installing Pokemon Go on the Nox App visually looks Player, you can watch the video:

Errors and problems when starting the game in Nox App Player

Below I will list the most common startup errors Pokemon go games in the Nox App Player emulator:

Why I get the message “GPS signal not found “?

This is the standard Pokemo go game bug related to the definition. your location. Restart Nox and the game itself. Go to settings, then to location and set the Mode to High accuracy.

Why me I get the message “Our servers are humbled by your incredible response ”?

Restart Pokémon go or wait until the server do not return to normal operation (due to technical work on them or their overload).

Why can’t I see Pokestops and Gyms nearby?

Check your virtual location and install it in the places where the game is exactly supported (e.g. closer to local megalopolises).

Why is the virtual card empty?

This is usually a problem with a slow Internet. Wait a bit either reload the emulator (or upgrade to a faster package Internet service provider).

What should I do if the game suddenly freezes?

This may be due to network instability or congestion. servers. Wait a bit or restart the game.

Why when I open the camera in the game, I see glitches?

This is because your computer does not support AR function. Just close the camera.

Why does the game hang on the boot screen?

Go to the emulator’s settings, then to “Advanced”, and set the Rendering Mode to DirectX.

Why is my character moving by himself or why is the game lays?

If you turned on VT, but the computer does not recognize it, turn it off antivirus and start over.

Why there is no login option through a Google account at the beginning games?

How to update the game if there is a new version?

Uninstall the old game, and then install the new version from verified source.

Nox App Player is just made for playing Pokemon Go on PC. By developers’s statements, they wrote the product according to the requirements and the specifics of this game, because to play “Pokemon” on Nox will more comfortable than on any other Android emulator. Not less, nothing is perfect, and if you met with game errors, then refer to the tips listed in the article – Some of them will definitely help you.